Why oughtn’t you to be on it?
Let’s get on with it!

But I believed it. The Great was yet to come; the Society had still to be. In return for the Great Society there was a virtue of the old continent, with obsolete dogma and with having to pay a quantity of our cheap labours for the wealth of the nation. And in a version of Korean society there were for over a century the workers labored silently to settle down to that kind of such economical self-discipline; without hope and without despair, in here they had sweated over to settle into the prosperity of their nation, for her family and by his companions altogether. By the time they caught up with other countries’ high heels, their untimely boots were sweated of bitter, but the timeless walkers were sweet of bitter; the Korean nationals would be proud of the works, beloved of the fatherland, and they could have a belief in our stoical society. Thanks to our “continence,” then I could be born between the legs of the motherland, out of the land of joie de vivre!

But then I’ve believed in our society to turn up normalcy. The Great was yet to come; the Society was still to be. I was hoping for the homeland to be big on our decent work, waiting on it with our working class. For the past half-century we called on both conglomerates and autocrats, without pride and prejudice, to create and establish a new order of plenty for all of our working people; at the time, our comrades were about to relax their indecent haste in waste, to recover our lost time with sweated labours out of the good old days, and to break the dog-eat-dog system down into the ground of equilibrium, liberalism and unionism. We wished to ever survive out of the Korean Modern Times. And our true activists should have obviated the unfair system to be out of forcing our sweated labours; to be out of suppressing our rights to collective bargaining; and to be out of killing our freedoms to unionization and its associateship. Sometimes, however, when our true martyr could have no recourse but to do self-immolation away with abuse by employers—in order to “Guarantee the Three Basic Rights of Laborers!”—Chun Tae-il (A.D. 1948–1970), he cried out against enforced injections of amphetamines and against forced overtime working in it to work on the backstreets of Pyeonghwa market (that bodied forth its verbatim “peaceful market” like that oxymoron)[i]; or, sometimes just because someone would have tried for the right to collective bargaining to be above a lockout through ad hoc unions, our true martyr Lee Suk-kyu (A.D. 1966–1987) had got to be shot dead of shrapnel out of tear-gas attacks by Skeleton corps (that was a herd of riot police “camouflaged” with the plainclothes)[ii]; or, sometimes just because somebody’d not drop out of his union shop, our true martyr Park Chang-su (A.D. 1958–1991) had got to suspicious death of “torture” by the National Security Agency, as digging themselves into a hole with their “spoliation of evidence,” they committed necro-klepto.[iii] We wept, in silence———

But just at that time when the man in the street (whom we’ve called an “earnest fool,” in-stills—)҉—was getting into the civil rights lawyer protecting our victims of this carnage against Skeleton corps, then he on behalf of us has fought against the injustices of the system we couldn’t beat, as if a maverick angel with us were now and forever in it to win it, as affecting it in our heart still and all; his pledge and our choice on the maverick warrior were going to get in the foolish President, the late Roh Moo-hyun (A.D. 1949–2009); in-still—his call down to us, and our call up to him— ҉ ~  Evanescently, he’s taken away from us and soon we joined in his tears; still I could, I can be on it with him…. May they all rest in peace; I recall these in labour dispute have hurt too many innocent people, therefore, I hope such a tragic incident would not happen to us in the decent labour market-to-be again.

After that time, the agony and the sweat have been again and again. I couldn’t’ve believed in it. The Great was yet to come; the Society has still to be. As a matter of course, quality of working life in our stoical society has improved on labour productivity, wage labour and working hours, now in progress but still in part. As a matter of fact, in Korean society collective bargaining rights mayn’t be allowed commonly. For example, the crawling down of years (2000–2016) saw unionization rates stand still at around ten percent,[iv] as the following Chart 1.

Meanwhile, the locust years (2006–2018) recently saw industrial disputes on strike are more or less raised in a corresponding course of collective obstreperousness, as the following Chart 2.

On the contrary to other factors, particularly collective labour disputes have more and more increased up to one hundred and seventeen disputes—this dispute clearly may exemplify the growing gap between factors in the industrial disputes, so that dispute has got to risk our decent labour market, as the following Chart 3.

As a result, whereas the collective labour disputes continued increasingly, its coverage rates more or less decreased in free agreement with de facto control over the settlement of a dispute by wage earners, individual and collective, and without rights to bargaining. That meant our working people cannot sing from the same hymn sheet to sing from the same song sheet—unlike the bushtit! Why must we be in it? For Korean “workers” we had no choice but to act up to a different legal standard—in order to be out of the International labour standards[v]—lest we can have to play politics with working people’s jobs (e.g., “civil servants, teachers or conscripted soldiers”); on the other hand, corporatocrats, bureaucrat and conglomerate have been long for dispersing our unionization, for dismissing collective bargaining, and for stifling our free expression into silent screams. I’m in it. Why oughtn’t we to be on it?

But then again I believe him though in it. The Great Society was yet to come; the best is still to be. In the here and now, Korean society wishes upon the full Moon, who is an old buddy of his, another warrior would be soon coming down to us, at long last; ’twas the rising of the Moon, whose full ratification has been meaning to fall under I.L.O. fundamental Conventions that had best be on us for decent work to break away the sweated conventions beyond this old continent. And he’s gotten it in, to get in on it; in-still, we’re on it with him now. This year falls on I.L.O. Centenary Ratification Campaign. For advancing social justice and for promoting decent work, many people have walked a great step forward keeping us in better workings and making us into nice jobbings. Ye’s You did it! This month, at least, for Korean laborers, also falls under a golden age, only a few weeks remaining on the presidential pledge that has been going to ratify these four labour standards of the fundamental Conventions—(i) Freedom of Association and Protection of the Right to Organise Convention (No. 87, 1948); (ii) Right to Organise and Collective Bargaining Convention (No. 98, 1949); (iii) Forced Labour Convention (No. 29, 1930); and (iv) Abolition of Forced Labour Convention (No. 105, 1957)—at the International Labour Conference on June 10–21. And We can do it again! This day of judgment, at least upon his will, of the eclipsed Moon’s own alignment with the laborer of the world, then shall fall into the moment of truth if ye would be supposed to do our business in the light of a day. By the time unless dare he to give it up nor to put it off, or to run away from this conference, as the full Moon has meant his own business through the selling of the President, Moon Jae-in WILL be fixing to set up for his full ratification of the four pledges. So I believe him & you all to advocate hereby these four Conventions; thus I hope, as of today, we’ll let him make it up to us and we can gonna be on it altogether. Now that the ball is in your court, and ye would like to put this ball squarely in the Korea’s court; to bring order out of chaos, we should be obliged for unless ought “the” President Moon to “vacillate” on his own ratification—in the new order to contend for our faith, for our existence and for our freedom.

I have yet to see him smile and still to wait for him now. The Great Society is still ahead of us, in the future; ye have got to take us into one step closer, nonetheless. If you would make one small step for us, we can take one great leap for this world; in-stills—And for the sake of our maverick heroes.

Last but not least, we should urge him to get on with it.
Working together: Making a difference!

[i] You can refer to this biography: Cho Young-rae (2003), A Single Spark: The Biography of Chun Tae-il, Korea Democracy Foundation & Dolbegae Publishers; also, see this page (in Korean): http://www.chuntaeil.org/?r=home&c=1/12/18 or Wiki’s page (in English): https://en.wikipedia.org/wiki/Jeon_Tae-il

[v] You can see this standard on I.L.O. page: https://www.ilo.org/global/standards/introduction-to-international-labour-standards/conventions-and-recommendations/lang–en/index.htm

And you can see the charts data: Data of the Charts 1 to 3 (Click);
also, you may access to these data on the pages: http://kosis.kr/eng/; and https://stats.oecd.org/

* For struggling against the Korean history of property speculation, We as the first fully-fledged NGO have performed a citizens’ movement for Economic Justice, Political & Legal Justice, Korean Reunification, International Peace & Security, Consumer Rights & Protection, Urban Reform and Housing Stability since 1989. This statement was contributed by Hochul Jung (hcjung@ccej.or.kr). 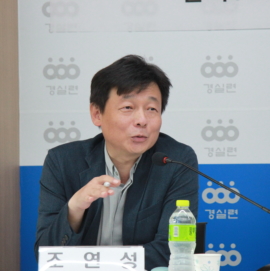