The Hong Kong Special Administration Should Immediately Stop Suppression of Democracy and Human Rights, and Guarantee Freedom of Peaceful Assembly and Association

The protests that began on 31 March  2019 demanding the withdrawal of ‘Fugitive Offenders and Mutual Legal Assistance in Criminal Matters Legislation Amendment Bill(Extradition Bill)’ in Hong Kong are continuing until today. The protests started with 12,000 people but have expanded to more than 1 million as of  June in 2019. Though Carrie Lam, the Chief Executive of Hong Kong, announced the tentative suspension of the amendment on 15 June, more people are joining the protest demanding complete withdrawal of the extradition bill and the resignation of the Chief Executive. While the Hong Kong Special Administration began a violent crackdown on the protesters, the central government of China has ‘warned’ its armed intervention. Freedom of expression and peaceful assembly of Hong Kong citizens is being seriously violated. We, 92 South Korean NGOs, are expressing our grave concerns on indiscriminate and violent crackdown on peaceful protesters in Hong Kong and express our solidarity to Hong Kong people’s persistent resistance for democracy and human rights.

The extradition amendment bill, of which the Hong Kong citizens are calling for the complete withdrawal, enables the extradition of criminals to China, Taiwan and Macau, which have not signed extradition agreement with Hong Kong. While the current extradition bill makes it mandatory to go through the deliberation of the Legislative Council of Hong Kong to extradite criminals, the amendment bill allows the court to make decisions just through a review of documents without interrogation process if the Chief Executive decides to do so. Under the situation that the involvement and pressure of China are increasing, Hong Kong people are concerned that the bill, if passed, will threaten the safety of human rights activists, journalists and NGO activists in Hong Kong and jeopardize Hong Kong’s autonomy. Given that there are not enough safeguards to protect the human rights of Hong Kong citizens, and that the Chief Executive of Hong Kong is elected by a pro-government electoral college and receive a final appointment from the Chinese government, the Hong Kong citizens’ call that the extradition amendment bill should be completely withdrawn is fair. Also, Hong Kong citizens’ protests are an expression of their strong desire for democracy and human rights. It reflects social and economic deprivation of Hong Kong people and the reality that Hong Kong’s autonomy is not guaranteed.

However, the Hong Kong Special Administration is pushing ahead with a harsh crackdown and indiscriminate arrests, labeling the protests as illegal. Police fired rubber bullets and “straight tear gas” at the protesters, leaving dozens of injured and arresting about 500 people so far since last June. The administration even indicted 44 participants of the protest which was held on 28 July, on a charge of rioting. The excessive response of the police is a clear violation of <the UN Basic Principles on the Use of Force and Firearms by Law Enforcement Officials>, freedom of peaceful assembly and association as specified in ‘the Basic Law’, which is the constitution of Hong Kong, as well as  the International Covenant on Civil and Political Rights. In addition, on 29 July, the central government of China also labeled Hong Kong protests as ‘violent’ and ‘illegal’, strongly criticizing the protesters for “any act that harms the sovereignty and security of the country is unacceptable,” and even forewarned the possibility of deploying the People’s Liberation Army. The actual armed intervention of China would result in unpredictable incidents, and it could be recorded as another history of oppression on democracy. It should never happen.

Despite the harsh crackdown of the Hong Kong Administration and the ‘warning’ of China, the resistance of Hong Kong citizens is spreading to all levels of society. On 5 August, half a million people participated in a general strike, and simultaneous protests continued late into the night. We fully support the desire of Hong Kong citizens to protect democracy and human rights, and stress that freedom of expression and freedom of peaceful assembly and association should be guaranteed under any circumstances. In addition, we urge the Hong Kong government to stop the indiscriminate arrests of protesters and withdraw the indictment. We stand in solidarity with Hong Kong citizens’ peaceful and persistent resistance for democracy and human rights. 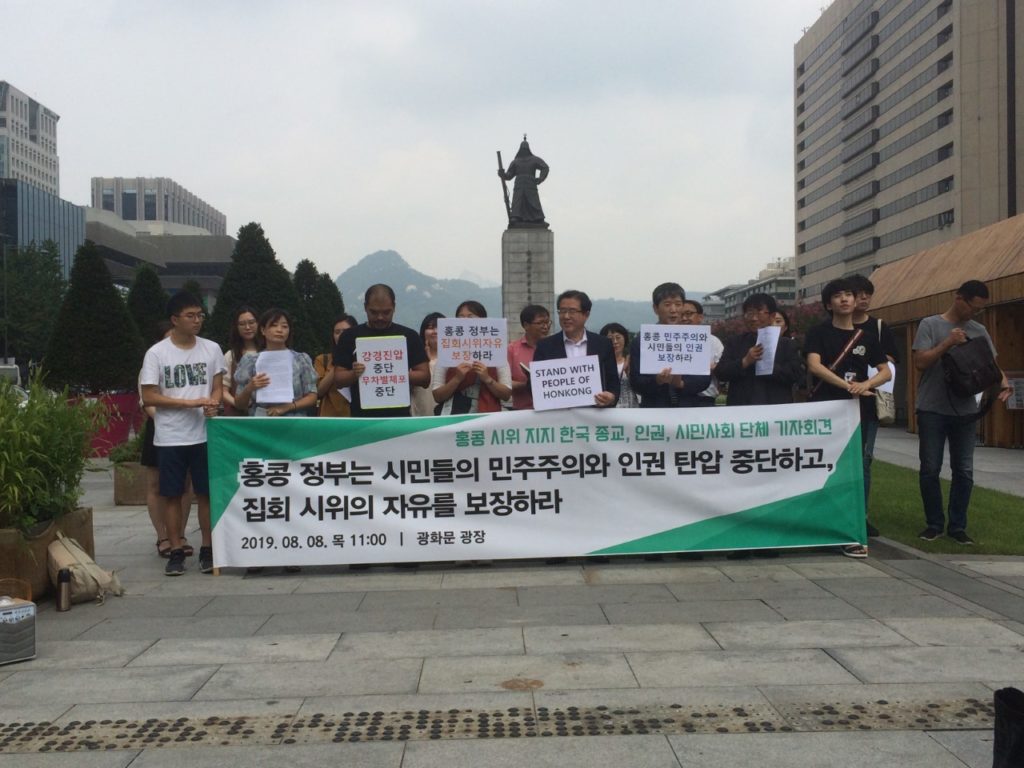 [Housing market] How do you solve a problem like Korea’s dysfuncti..

I.L.O. Centenary Ratification Campaign: “Why oughtn’t you to be ..